What are the Northern Lights?

Sun sparks that illuminate the Earth’s atmosphere.
The Northern Lights (Aurora Borealis) are a physical phenomenon caused by the impact of elementary particles, mostly electrons, with the atoms that are found in the outer layers of the Earth’s atmosphere. Because of the impacts, the atoms are excited and emit light of different colour. Auroras have a wide variety of features and appear in polar regions both in the northern hemisphere and in the southern hemisphere, so it is more correct to call them polar auroras.

Our Sun is a star, like many others in the Universe, and nuclear fusion processes occur inside it. The nuclear reactions are accompanied by a release of energy that, from the outer layers of the Sun, spreads in the surrounding space in the form of electromagnetic waves (light and other invisible radiation) and of elementary particles, mostly protons and electrons. The flow of particles projected in space increases or decreases as a function of turbulent phenomena like flares and sunspots.
Travelling at speeds of hundreds of kilometres per second, the particles come close to the Earth and flow around the magnetic field that surrounds our planet. Some particle swarms creep at the poles where the magnetic field is weaker and, at heights varying between 300 and 100 km, collide with atoms of the rarefied atmosphere. Following the impact, some atoms are loaded with energy and become luminescent, for example nitrogen emits bluish lights, oxygen greenish.

Thus originate the polar auroras, which are more frequent and intense when solar activity is at its maximum and, therefore, the flow of particles increases. On average, residents of areas at 60° to 70° latitude may witness a hundred polar auroras annually. Exceptionally, during the most intense solar storms, the phenomenon is also visible at lower latitudes.

Aurora Borealis,
a spectacle of nature in the Lofoten Islands

Hunting for the living light, the lady of the sun – Aurora Borealis.

“My name is Maurizio and I hunt the Northern Lights in Lofoten. Normally the season lasts from approx. August 25th -26th to approx. April 15th.
The period in which the lights are visible varies a little in the beginning and end of a season, due to the strenght of the Aurora Borealis and at what time and which day the lights hit the earth.
To be able to take photos of the Aurora one has to have a decent digital SLR -camera so that you are able to adjust the ISO, as well as the exposure time. A good tripod is necessary to keep the the camera competely still and, in addition, a remote control is an advantage.

I am 51 years old and did my first season in August 2010. Since then I have learned how to create better night photos, how to hunt the Aurora and what one needs to hunt the lights. In February 2015 I upgraded my camera from a Nikon 3200 to a Nikon D750 Proffesional, as well as an upgrade of my Sigma 10 -20 mm lense to a Nikon 24-70 mm Profesional. In addition I want to add a wide angle lense to my equipment, a nikon 14-24 mm, a award winning lense in its class.
To help me determine when the lights will appear in Lofoten I have downloaded 2-3 Aurora apps on my mobil. I also use www.storm.no to check the where the sky is clear, partly cloudy or whether I will find areas where the light will break through the cloud cover.
From the time we recieve an alert that the Sun has had an outburst which can cause the Northern Lights in Lofoten, usually 2-3 days passe before the lights have travelled closer so that we are able to see it. The Aurora Borealis is in no way harmful for us humans, quite the opposite, it will give us a fantastic experience of one of natures wonders with its colourful and vivid display in the sky. The northern lights are found at an altitude of approx. 30’000 km up in the atmosphere. Lofoten, with its diverse topography, has great local weather variations due to its tall mountains and different islands. This means that while one part of Lofoten may experience heavy snow and overcast, another part of the island may be soaked in sun light – at excactly the same time. 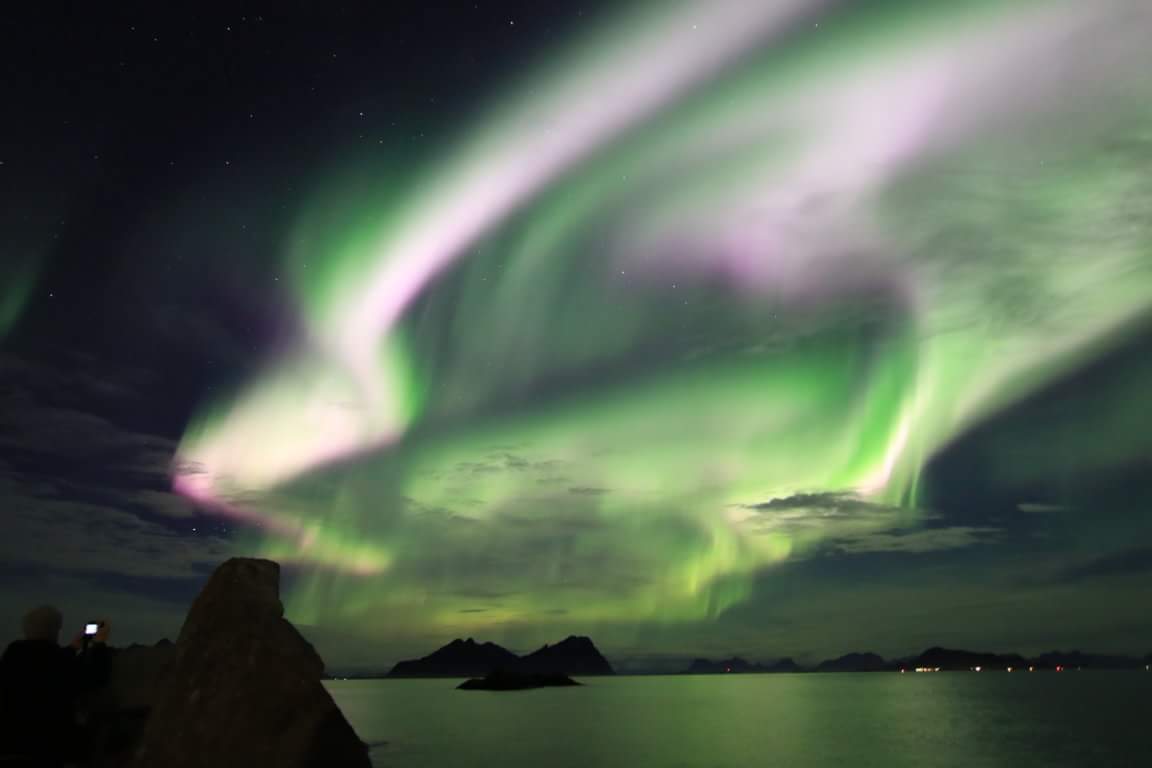 The designation “KP” is used to measure the strenght of the Northrn Lights. The scale starts at KP 0.0 and reaches KP 9-10. As the KP increases, the further south the Northern Light belt is visible. With a KP between 0.0 to approx 1.87 the best chance to see the Northern Lights in Lofoten will be on the Northern side of the islands. When the KP passes 1.87 the chance to experience the lights in southern Lofoten increases.
At KP 4 and up the lights can be seen south of Lofoten and in the Sea between Lofoten and the mainland south of us.

Athough the Aurora may appear to be motionless in the sky this is never the case. The speed of the lights have been measured at somewhere between 100-1000 km/sec. The angle of the lights, which you can see on the apps, varies between red and green, green in the north, yellow straight up and red in the south. We also have an IMF scale which goes from 0 -36. The higher the IMF – the stronger the lights.

In my opinion, Gimsøya – approx 30 km from Svolvær/Kabelvåg – is the best place to experience the Aurora Borealis in all of Lofoten and I call the western part of Gimsøya “the Aurora Park”. In addition, Skagsand in Flakstad, Reine, Laukvik, Haukland Beach, and Utakleiv are amazing places to experience the Aurora Borealis. It is always exciting to get in the car in the evening, heading west, hoping to catch a glimpse of a predicted Northern lights outburst – to see if and where the lights will appear, what shape it will take and what colours will be displayed. On these excursions I bring some food and drinks, warm clothes, all my camera equipment and tripod, as well as high expectations and lots of patience.

So, all that remains for me now is to wish you a fantastic and exciting search for the Aurora Borealis here in Lofoten.
I hope to join you for the hunt!“

Other info and tips to know before arriving
The Aurora Borealis is a natural phenomenon that has always fascinated man. The path that brought us to a correct scientific definition was many centuries long, more than 25; a very long period of time during which science left the field open to the creation of legends, myths and superstitions that were associated with it. The truth is that the phenomenon of the Northern Lights is so mystical and inexplicable to us that, when it appears, legends, stories and fairy tales that we have read come to mind and we cannot believe that there isn’t any truth in what our ancestors have passed down to us. 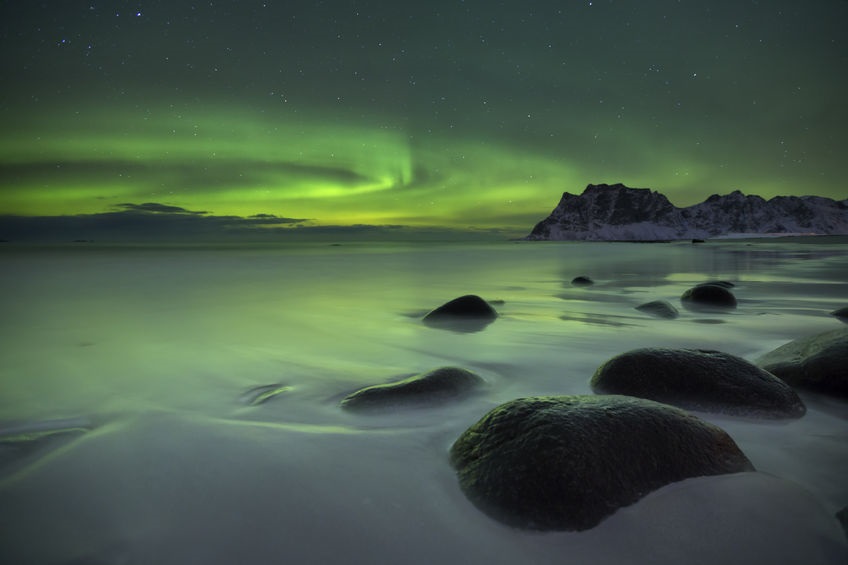 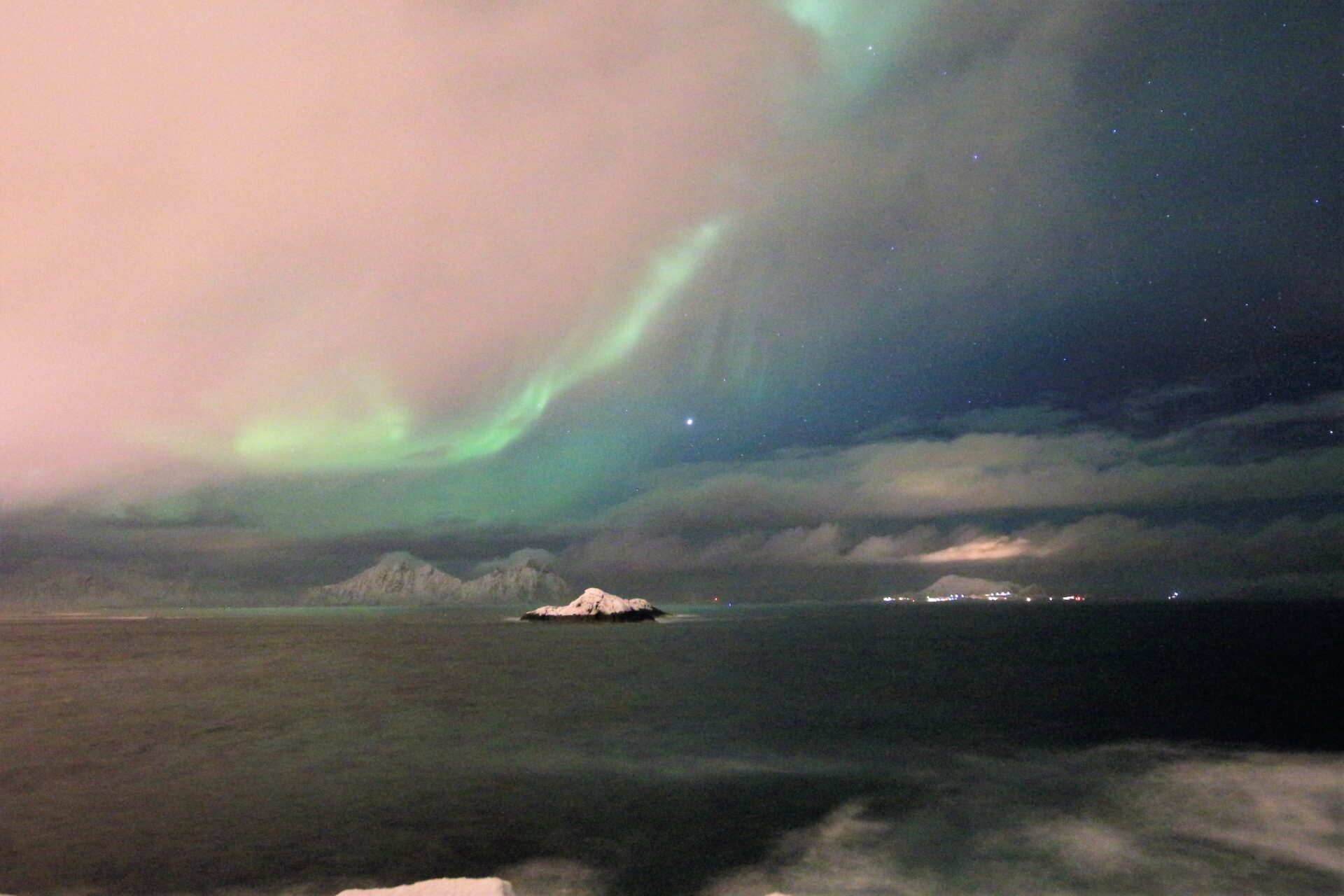 The Vikings believed that the colours derived from the light reflecting on the shields of the Valkyries. They were the messengers of the god Odin who came from Walhalla riding their horses to designate those who would be killed in battle. Once in Walhalla, the Valkyries brought horns filled with beer to the Einherjars, the warriors killed in battle. The luminescent streaks were their spears, the flashing sparks the reflections of their shields and their bows the Bfröst (rainbow), the legendary bridge over which the souls of the dead passed into the afterlife. The flares that were observed in the sky signalled that the messengers were at work, a sign of a battle taking place somewhere.

For the Lapps, the Northern Lights were a powerful and scary phenomenon. In fact, they indicated the presence of the messengers of God, creatures to be respected and feared. They believed that gestures like whistling, shaking handkerchiefs or ringing bells incited the Northern Lights to attack offenders. If they feared to have aroused the anger of the Aurora Borealis, they sang a rhyme several times: “Flickering, flickering, Hammer in its leg. Birch bark in its hand.” The hammer symbolised the angels’ revenge when someone lacked respect to God, while the birch bark created the flames which incinerated trespassers..